Préludes, Etudes and Esquisses for piano by Chopin, Alkan, Saint-Saëns, Rachmaninov and Scriabin though all 24 keys

Venue for all 3 concerts: Kaisersaal in Historisches Kaufhaus Freiburg

Préludes, Etudes and Esquisses for piano by Chopin, Alkan, Saint-Saëns, Rachmaninov and Scriabin though all 24 keys

"The Well-Tempered Clavier or Præludia and Fugues through all keys and semitones..."

In the Eye of the Wind

Single tickets for the respective event or strongly discounted festival tickets for all 3 concerts of the festival can be purchased via online ticket shop below or alternatively at the box office. The number of seats is limited to 100 due to current restrictions (as of January 21th 2021).

Therefore an online-purchase is highly recommended in order to ensure a seat.

Through all the keys, modes and forms of expression: Music unites

For the "restart of culture" the House of Culture Freiburg is burning to make an attempt "squaring the circle" by this novel little festival and to show that music as universal language of mankind is capable of building a connecting bridge despite all contrasts and frictions and brings together different times and cultures.

The journey starts in the first concert (11.06.2021, 07:00 p.m.) with the romantic miniature of the Prelude, the Etude and the Esquisse (sketch) and wanders through all the tonalities of the European major and minor keys. Wonderful pieces presented by Yang Tai, Pietro Ceresini, Gaidar Beshmkembirov - all being part of the active free music scene of Freiburg - and "spiced" by contemporary music by Rainer Maria Klaas and also a premiere by Juan Chuquisengo.

The Well-Tempered Clavier by Johann Sebastian Bach which is rediscovered in its entity as "restart of culture". Music which again and again reveals new facets throughout the centuries and makes hidden secrets becoming visible. Only a few pianists worldwide are capable to perform this work in its entity wandering through all 24 major and minor keys and which is also called as the "Old Testament" of European music history. With Schaghajegh Nosrati a world-class pianist and distinguished Bach expert is our guest who already gave her debut in Freiburg in July 2020 after a long Corona caused silence with the Goldberg Variations by Bach as first attempt of culture restart.

At first glimpse it might be surprising that the final third concert (13.06.2021, 05:00 p.m.) of this festival lets the listener travel back in time towards totally different "sounds from afar" which in a superficial consideration are inspired by traditional Persian music but which will evolve a completely novel, even avant-guard like progressive form of art and sound.

Double stops on the Kamancheh, Paganini-like Pizzicato and Spiccato techniques which are embedded into rhythmical patterns that are extremely difficult to grasp. "Outrageous" things will be heard during this final concert with exclusively original compositions by Misagh Joolaee as one of the best and versatile Kamancheh performers of current times.

Sebastian Flaig, originally from Freiburg and one of the world's top specialists for oriental percussion, found the key for rhythmical and expressive mirroring of Misagh Joolaee's worlds of sound. As a fabulous duo a complex multilayered form of expression is presented to the audience. Not least due to these aspects and characteristics this music was awarded the Preis der Deutschen Schalplattenkritik in February 2020.

The contrast to Bach transforms more and more into a bridge between the times and cultures and becomes a symbiosis the more the listener dives into this world of sounds from afar and discovers the following astonishing analogies between Bach and this music rooted in Persian music:

Not only the number 12 in both musical systems (12 semitones in Bach's music / European classical music and 12 dastgahs [modes] in the music of Misagh Joolaee) can be perceived as such an analogy but also the astonishing understanding that the association of each key in baroque music with a certain character / affect is valid in Persian Music as well in which each mode expresses a certain character / state of soul.

Finally it can be experienced and discovered that both in Bach's music and in Persian music freedom is evolving out of strictness.

In accordance with the motto of this festival - music unites - finally all stiles, genres and artists meet themselves via the universal bridge of Bach's music and show a new perspective through world music

Therefore an online-purchase is highly recommended in order to ensure a seat.

The complete revenue of this concert is completely designated for the benefit of the artist and for the of continuation of this petite but fine concert series. 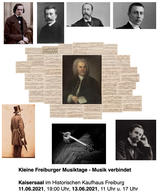 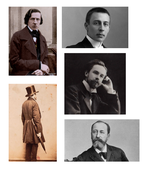